This performance was originally scheduled for Saturday October 10, 2020, but was postponed due to an injury.

Singing star with pranks Carmella Lucia Pommodori di Monte Carlo (Françoise Vanhecke) parades with her singing talents and boasts at the audience how well she can sing Mozart, Beethoven, Puccini, Bach… but also the repertoire of Piaf, Dalida and Michael Jackson! Her director Richard Le Grand (Lieven Debrauwer) is secretly jealous of her success and things go off the rails ...

A hilarious theatre performance for all ages! 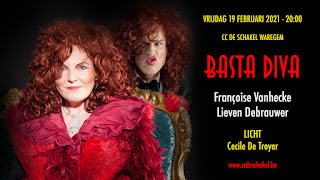